The Community Dialogue Workshops, formerly known as the Healing and Reconciliation Workshops are conducted in coordination with Randy Butler, Founder and CEO of Institute for Sustainable Peace.

Please watch this video for an introduction to the Community Dialogue Workshop and click on the documents to access the kit that you can use in your community. Please feel free to contact us at southsudanwomenunited@gmail.com with any questions.

SSWU was honored to participate in South Sudan Unite and to share the Community Dialogue Workshop Kit and The Book of Forgiving by Desmond Tutu and Mpho Tutu to a remarkable group of youth leaders! Thank you, Luol Deng and Arek Deng-Guelly! 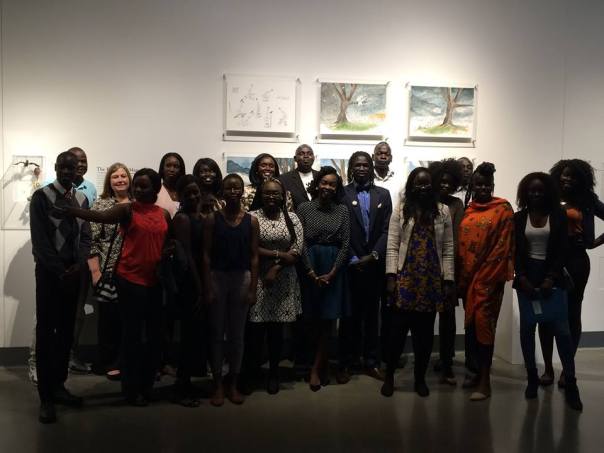 SSWU Coordinator, Margaret Atarri shared a reflection re the impact on her life of The Book of Forgiving by Desmond Tutu and Mpho Tutu. SSWU distributed copies of this important book to workshop participants. 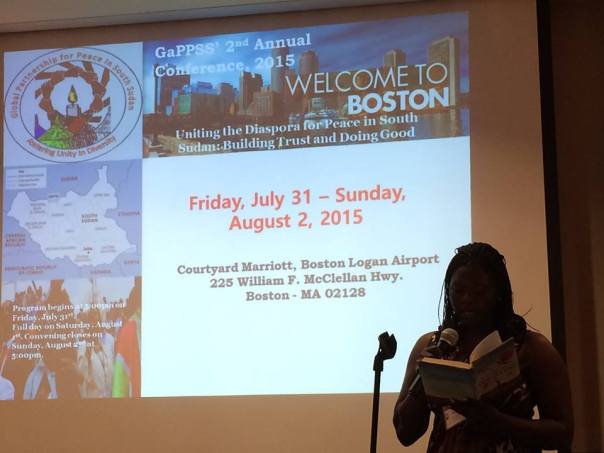 In partnership with My Sister’s Keeper and the Institute for Sustainable Peace, SSWU was honored to host a Healing and Reconciliation Workshop at the First Church of the Nazarene in Lynn, MA. Together we learned that when we experience healing and reconciliation in our own hearts and communities, we are better equipped to support peace-building efforts back home.

On February 7-9th we had the opportunity to conduct a healing and reconciliation workshop in Washington, DC. One of our members, Kuoth Wiel wrote about the workshop on the Huffington Post along with a video that we made to get out our message of peace.

“I was born in the first civil war, I grew up in war, got married in war, and had children in war. My whole life is consumed by war. I know what war looks like, but what our people have done to each other was something I could have never imagined,” one woman remarked.

On December 15, 2013, South Sudanese experienced a state of shock as news spread of a political dispute that led to the killing of thousands of South Sudanese citizens. For those in the diaspora these events produced a feeling that could not be explained in simple terms. Loved ones called from the homeland and recounted what was happening, while the person on the other end of the line could do nothing but listen. The diaspora had to deal with the fact that the country they had left to escape civil war, but since had declared independence, was now slipping back into a familiar state of violence.

The violence was not the same as the past civil war. Instead of fighting the Sudan government, it was now the SPLA, the army of the government of South Sudan, fighting those soldiers who had defected in response to the killing of civilians from the Nuer tribe in Juba, the capital of South Sudan. The President of South Sudan, Salva Kiir, who is from the Dinka tribe, accused the former Vice President, Riek Machar, who is Nuer, of attempting a coup. Despite a ceasefire agreement, fighting between the two major groups continues and targeting is based on ethnic affiliation. In response, a group of South Sudanese women in Washington, DC decided to unite in an effort to harbor peace.

Word spread quickly throughout the South Sudanese community about the group that came to be known as South Sudan Women United (SSWU.) Women across the United States joined SSWU; weekly teleconferences were held; and on February 7, 2014, SSWU organized its first reconciliation and healing workshop. The attendees traveled to DC from various parts of the United States; they represented different tribes in South Sudan; and they came from all walks of life. In spite of their diverse backgrounds, the women all shared a common concern and vision for their people – they love South Sudan and they want peace!

Randy Butler, the Founder and Executive Director of the Institute for Sustainable Peace, spoke to the women about the importance of forgiveness, and he provided a series of questions and exercises designed to begin a dialogue for reconciliation. The exercises gave the women a chance to address how the conflict in South Sudan had affected each of them personally. As the microphone was passed to the first women to share, a grim feeling of loss settled over the room. The conversation evoked the same difficult feelings that had been experienced when the violence first broke out in December.

Moving beyond her own personal experience, each woman took a moment to examine what role she or her tribe played in the conflict. Admitting a fault or a wrongdoing is not easy for anyone, especially in front of more than twenty strangers and given such difficult circumstances. After acknowledging any negative contribution to the conflict, including choosing to remain silent rather than speaking out against violence, the woman asked for forgiveness. That day, the women established a bond that is hard to come by, a bond that is a reflection of the resilience they have carried with them throughout decades of war.

“When one part of your body is hurting, the rest of your body will also hurt and feel it as well,” expressed one of the women. The population of South Sudan includes people from over 64 distinct ethnic groups, so how can every single person’s cry be heard or felt? This was one of the questions that the women had to answer as they brainstormed ideas for the future of their homeland. The question may be perplexing but there was a simple answer, they are women. As women, as mothers, as daughters, sisters and wives, we have the unique and profoundly important ability to understand and share the feelings of another – even the feelings of those who are different from ourselves.

Women make up over 60 percent of South Sudan’s population and they make up the majority of those suffering. Despite the fact that the conflict is the result of political divisions within the South Sudan government, these women and all those who are suffering, displaced and hungry do not care about politics. Instead, in the midst of deep despair and great loss, the women of South Sudan are hopeful as they hold on to each other, to unity and to the love that has endured throughout the generations and has transcended human degradation, systematic discrimination and horrific atrocities. Together, these women are putting humanity before politics, and declaring and believing that by choosing peace and rejecting violence, tomorrow can be a better day for the people of South Sudan.

By Kuoth Wiel, a South Sudanese model and actor, with a key role in the forthcoming Reese Witherspoon film, “The Good Lie”, and member of South Sudan Women United.

South Sudan Women United’s vision is a peaceful and prosperous South Sudan where all citizens enjoy freedom, justice, equality and the protection of human rights; where citizenship as South Sudanese is the manifestation of our unity; and where our diverse tribal affiliations are honored as they represent the unique values, culture and traditions that make South Sudan extraordinary. SSWU’s mission is to organize and respond to the needs of South Sudanese, especially those in crisis, through advocacy, fundraising and the delivery of services. SSWU is based in the United States and is working to link with South Sudanese women around the world, especially those in South Sudan, Kenya and Uganda. Throughout the workshop, the women sang together, “women are crying for peace, salaam, shalom, peace, salaam, shalom,” and they created their first video, “We Choose Peace.”